With the current energy crisis, some Britons are experiencing heightened levels of stress and anxiety after becoming “obsessed” with checking their energy use on their smart meters. Natasha, 34, from Middlesbrough, had a smart meter installed last year after her previous energy provider went bust as she was offered one automatically when she joined their new provider. She and her partner decided to have one installed so they could keep an eye on their usage and try and keep their energy costs as low as they could.

Natasha told Express.co.uk: “It was when the energy stuff started happening and a friend of mine had one and she said it helped her keep a track of things, so we thought it would be a good idea.

“We weren’t actively like, ‘We need to get a smart meter,’ we were offered it and we thought, ‘Why not, it could help.’”

After the smart meter was installed, Natasha explained how for months things continued as they normally would and even though she did take notice of it, it didn’t bother her too much.

She said: “We would look at it a few times a week and having it did make me turn off lights in rooms I wasn’t in and turn off the telly properly, it was all little things.

“I did stop leaving the oven on a low light to keep my partner’s tea warm when he was late coming home from work but apart from that nothing changed too drastically at first.”

READ MORE: Half a million pensioners to miss out on state pension rise due to where they live

Natasha explained how she began to start worrying about her energy usage in February when Ofgem first announced the 54 percent price cap rise for April. At the time the energy regulator announced that its price cap was to rise from £1,278 to £1,971.

She said: “It literally started off with me moving it from the kitchen to the living room under the television so I could see it when I was in there. I then just started grabbing it whenever I was doing something, like using the microwave or the washing machine and it became a habit.

After Ofgem’s August announcement, Natasha began to get incredibly worried when she thought about her energy bills. Since the last Ofgem increase, like many others, the rent on her home had been increased and rising inflation was eating away at her income.

She believes this is where the anxiety started to make her feel overwhelmed and she explained that it has only gotten worse since.

She said: “I couldn’t think of anything else, I couldn’t watch the television because I was worried about how much energy was being used, I stopped using the oven, of course, I haven’t put the heating on.

“I struggled to sleep too because I was worried I’d left the plugs on and I would have to get up and check like I would have the smart meter in bed with me and I would keep checking it to make sure things were off. It was this niggling thought that just wouldn’t go away.”

Natasha had to ask her partner to return to working in the office full time as seeing the smart meter increase when he worked from home started to cause her to have severe panic attacks.

She said: “I just cried when I asked him, I felt awful but he would be working upstairs and I would just sit and watch the smart meter and I just freaked out.

“I didn’t want to, I just got myself so worried and worked up and it was every time he worked from home which was three or four times a week. It was so intense and I would be exhausted and wiped out after every attack.”

Natasha explained how at the beginning of October she knew she needed help after she started researching whether she could get a portable meter, or if she could get an app on her phone.

She added: “I hated leaving the house to go to work because even though I wasn’t even in my house, I didn’t know how much it was costing and that really frustrated me. I mentioned it to my colleague, about getting an app, and she just looked at me like I was mad.

“That’s when I kinda realised that I literally couldn’t get on with anything without knowing how much energy I was using, so for the rest of my life would see me just staring at my smart meter.”

Natasha started to share her worries and dependency on her smart meter online and began chatting with others who were feeling the same, she also approached some charities to get some more support about her worries.

Dr. Hana Patel, GP and Mental Health Coach explained that there was an anxiety disorder which focused on finances and money which is becoming “more common during these difficult times.”

She explained: “This is when people worry about their financial income even if they do have enough money and may even be worrying that an unexpected bill may lead to financial difficulties, or that they should be saving for retirement.”

Dr Patel highlighted that there is also specific energy anxiety which can be seen more commonly in people who pay for their energy using a prepayment meter.

She added: “This may be due to living in temporary accommodation and having factors beyond the control of the person, which makes dealing with energy anxiety so difficult.

“This can be compounded by worrying about paying bills, keeping the home warm enough for everyone and providing a comfortable and stable environment for everyone at home.”

Dr Patel explained that people should approach their energy provider in order to find out what support is available during these difficult times.

She added: “If you find that your anxiety is starting to make you feel physically unwell when you look at your smart meter, with symptoms such as a headache or stomach ache, if you avoid thinking about the smart meter or find that you cannot stop thinking about the smart meter, or keep looking at it throughout the day and if you have difficulty sleeping then it may be a sign that this type of anxiety is affecting your mental health and I would recommend making an appointment with your GP to discuss this further.”

Natasha explained how her family and partner are “incredibly supportive” about her smart meter worries and she is trying to contact her GP for further professional support and advice.

She added: “Everyone around me is so supportive and I couldn’t thank them enough because I know it’s not just me.

“There are so many people who are trying to find ways to cope and mine was, and still is actually, obsessing over my smart meter.” 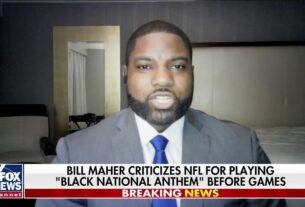 Rep. Donalds on 'Hannity': Bill Maher is right, there should be one national anthem before NFL games