The Earl and Countess of Wessex live at Bagshot Park with their two children Lady Louise and James, Viscount Severn. In a past interview with Sky News, the Countess explained: “We’re a lot more fortunate because we live so close to the Queen, so when she spends a lot of time at Windsor on the weekends, our children are more fortunate because they can go over and have tea with her on a regular basis.” Edward and Sophie moved into the property following their royal wedding in 1999, and the couple subsequently extended the lease from The Crown Estate for another 150 years.

The Grade II-listed building is set within 51 acres of land and has a whopping 120 rooms after it was demolished and rebuilt in 1879.

In comparison, Prince William and Kate Middleton’s Kensington Palace home only has 20 rooms.

It is estimated to be worth £30million if it were listed on the open market.

The Countess did an interview with the BBC earlier this year inside one room of the lavish royal residence, which was decorated with green striped chairs and a matching green carpet.

It also featured a gold-edged mirror above a stunning marble fireplace and lots of artwork on the walls.

Prince Edward also shared a look at his home office as he officially opened the NHS Nightingale Hospital in Bristol via Zoom.

It featured a wall-to-ceiling wooden bookshelf with several framed photos of his family.

Sophie appeared on Zoom to share her tips for home-schooling children while schools were closed during the pandemic, with the clip showing her stood in front of a bookcase filled with DVDs, books and games, giving an insight into how the family like to spend their time.

Royal fans got a look inside the grandest room in the family home when Sophie appeared on another Zoom call.

It featured carved wooden walls with enormous double doors and brass handles, as well as two glass side tables with brass legs.

On one table, there was a small pot of cream orchids, a selection of ornaments, a photograph in a silver frame, and a desk lamp with a white shade.

Sophie revealed the kitchen at Bagshot Park when she filmed herself baking scones in 2020.

Sophie and Edward also have a second kitchen. Royal fans got a peek inside when the Countess joined a video call with Thames Valley Air Ambulance.

The Countess sat in a corner, alongside open shelving with a telephone, vases, and ornaments on display.

It had a classic dark navy scheme, with glass-fronted cabinets behind Sophie showing some fine China, which included teapots, teacups and saucers on glass shelving.

The grounds are equally as impressive as the building, with a private lake and several stables set within 51 acres.

Royal fans got a look at the outside of the property when Edward, Sophie and their children joined the #ClapForOurCarers at their home.

They could be seen standing outside a set of glass doors, with a climbing plant growing up the brick wall. 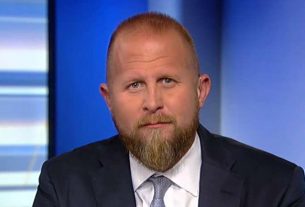