State pension: Expert on difference between ‘old’ and ‘new’

Plans are in place to increase the state pension age up to 67 and again to 68 in the coming years, but it has been suggested that the Government might consider a rethink. That could be good news for future pensioners, who may be able to enjoy a longer retirement.

New data from the Office for National Statistics (ONS) has suggested that Britons are living longer than in the past, but increases in life expectancy are expected to be lower than previously thought.

The state pension is currently set to increase to 67 in 2028.

A further increase to the state pension age is due in the 2040s, up to 68 years of age.

A slower growth in life expectancy than was previously thought could heap pressure on the Government to rethink their planned state pension age rises.

The state pension age is currently under review by the Department for Work and Pensions (DWP), and that review is expected to conclude next year.

Tom Selby, head of retirement policy at AJ Bell, believes the most recent data regarding life expectancy in the UK will turn up the heat on the Government.

DON’T MISS
State Pension to rise £290 in 2022 – ‘plug in’ this vital number now or YOU could miss out [WARNING]
TV licence fee frozen for two years – how much will you need to pay? [INSIGHT]
Personal Independence Payment set to be replaced with new disability benefit payment [ALERT]

He said: “Although we are all still expected to live longer, today’s downward revisions in projected life expectancy improvements will almost certainly be seized upon by campaigners to pressure the Government into rethinking state pension age rises.

“However, the previous Government stated its intention to bring forward the planned increase to age 68 to 2039.

“The current Government has also just kicked off a review into the state pension age, which is due to conclude in 2023.”

Mr Selby accepted that there may be a validity to suggestions that the current plans for the state pension age are no longer appropriate.

He said: “Given life expectancy is rising at a slower rate than previously thought, you could argue plans to increase the state pension age to 67 and 68 should be pushed further into the future – or even cancelled altogether.

“In fact, Labour’s 2019 manifesto explicitly called for the increase in the state pension age to 67 to be paused.”

With Prime Minister Boris Johnson currently under pressure, Mr Selby thinks there is a chance the Government may use the state pension age in an attempt to curry favour with miffed older voters.

He said: “When scandals over Downing Street parties are out of the headlines – and that could be a while at this rate – it would be no surprise to see the Opposition pushing hard on this issue.

“It is not beyond the realms of possibility that the Government might consider rethinking state pension age rises to help shore up support among voters who might have become disillusioned in recent months.

“However, any rowing back on state pension age rises would likely meet fierce resistance from the Treasury, with the Chancellor nursing a huge financial black hole as a result of the pandemic and desperate to claw back any extra cash he can.”

Being able to claim the state pension two years earlier than they previously expected could be welcome news for future pensioners, who will no doubt be eagerly awaiting the results of the ongoing review. 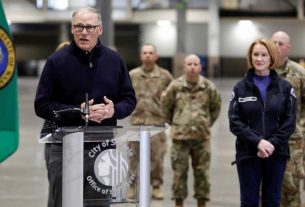