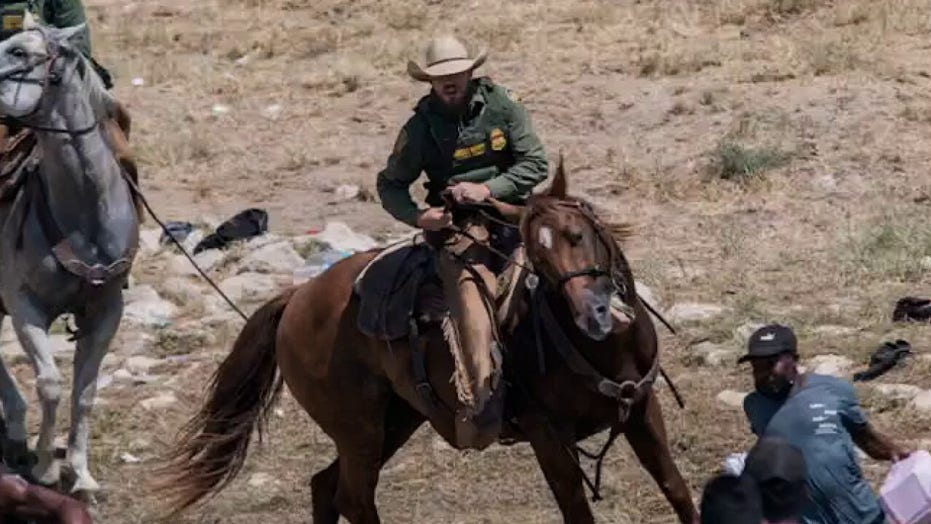 Rep. Mary Miller, R-Ill., tells ‘The Story’ the Biden administration is ‘too quick’ to pass judgment on agents protecting the border.

The investigation into Border Patrol agents at the center of claims that they “whipped” Haitian migrants trying to illegally enter the United States is still ongoing, six months after the claims were made and quickly debunked.

The controversy began amid the Haitian migrant crisis in Del Rio in September, where more than 10,000 migrants were gathered underneath the area’s International Bridge. As the situation worsened, agents were sent out on horseback.

Brandon Judd, president of the National Border Patrol Council, told Fox News Digital in an interview that the situation on the ground in Del Rio was a “powder keg” as migrants had just discovered that they were in fact likely to be removed rather than allowed into the U.S.

“These agents were specifically sent to that location to stop more people from crossing, that was what they were sent there to do,” Judd said. “This was under the orders of their management which of course is under the control of Secretary [Alejandro] Mayorkas.”

On Sept. 19, a Sunday, images began to circulate on Twitter of the agents trying to block migrants from entering the U.S., and in one case grabbing a migrants’ shirt. The controversy escalated as some media outlets and Democratic lawmakers misidentified the agents’ split reins, which they use and twirl to control and direct the horse — and falsely claimed the agents were using “whips” on the migrants. 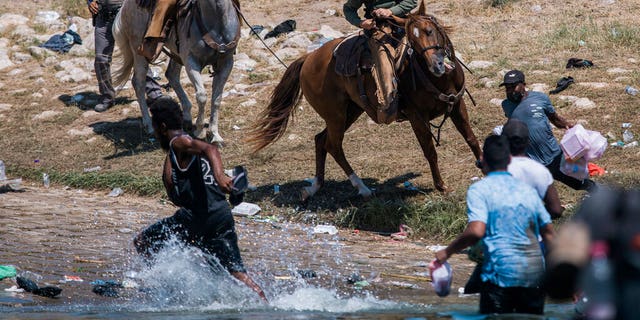 “With basic knowledge and two brain cells, anyone knows those agents use split reins. They do use them as a whip, on their horses,” one agent told Fox News at the time. “This helps get a quicker response from the horse to move out when needed, especially when the horse may be hesitant with groups of people or other animals.”

However, that didn’t stop top Democrats from weighing in, with Senate Majority Leader Chuck Schumer decrying “images of inhumane treatment of Haitian migrants by Border Patrol—including the use of whips.”

A photographer who took the images in question said that “nobody saw a Border Patrol agent whipping,” and Mayorkas initially backed the agents alongside Border Patrol Chief Raul Ortiz.

By Tuesday, his message changed, telling CNN that the images “troubled me profoundly” before adding that “one cannot weaponize a horse” against migrants. Vice President Kamala Harris also weighed in, saying she wanted an investigation and was “deeply troubled” about the alleged treatment of migrants.

Shortly after that, Mayorkas announced that horses would no longer be used in Del Rio, and the agents were shifted to desk duty pending an investigation into their conduct. He would go on to promise that the investigation would be “completed in days, if not weeks.”

That Friday, President Biden increased the pressure on the besieged agents by repeating the false claims of whipping, and also previewed what he hoped would be the outcome of the investigation. 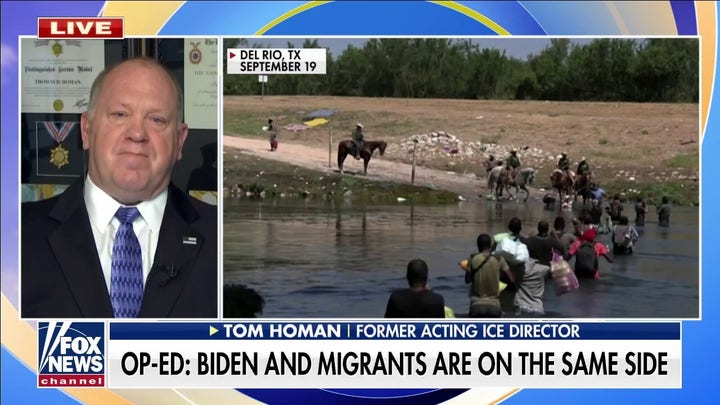 “To see people treated like they did, horses barely running over, people being strapped – it’s outrageous,” Biden said, making a whipping motion with his hand.

The spokesperson referred to an update from November, which outlined how the matter had been referred to the Office of Inspector General — which declined to investigate and instead referred it to Customs and Border Protections (CBP) Office of Professional Responsibility — and the steps that are to be taken.

But Judd, the head of the Border Patrol union, is one of a number of officials who believe it is being dragged out because the administration backed itself into a corner on the matter.

“I believe that they’re trying to drag this out and get the American public to forget about it because ultimately they’re going to have to come back and say [the agents] did nothing wrong, or they’re going to have to make some charges up and try to fit some charges under policy,” he said. “That’s the only conclusion that we can come to on why this is taking so long.”

A DHS official who spoke to The Washington Examiner in January shared that assessment, and even questioned whether the administration would ever release the report.

“I doubt that the current administration will release this report on the horse patrol incident because it makes the administration look terrible,” the official said. “They essentially convicted the mounted agents based upon a lie, which the investigation after 120 days would surely have revealed.”

Judd told Fox that it was down to politics that the agents were still not able to return to the field.

“They did not whip anybody, they didn’t do anything that was wrong, and yet they are still on administrative duties, they have not been released back to the field to perform their patrol duties like the American public expects,” he said of the agents.

Border Patrol agents have continued to face high numbers of migrant traffic throughout the winter months, and with spring and summer months approaching there are fears of a massive migrant surge around the corner.  Judd warned that the shadow of the whip controversy, and the Biden administration’s response, looms over agents as they go out into the field to protect America’s borders and could affect their ability to do their jobs in the coming months.

“Any time something like this happens it’s going to make you second guess the actions that you take, and the problem with that is when you’re second guessing what you’re supposed to be doing, people could evade apprehension, you could end up getting yourself hurt, you could end up getting innocent third parties hurt — because you don’t take the actions that are necessary because you’re worried you’re going to be second guessed by the president of the United States,” he said.

Funds held in the Canada RSP and RIF plans will stop …