Although most people would like to retire early at 60, many are finding that it’s an impossible dream. Almost a quarter (24 percent) are being pushed back into the workforce because they can’t afford to give up work, according to an explosive new report.

The dream of early retirement is definitely still alive but worrying new research has shown that it’s not always possible to make it a reality.

When it comes to the perfect age to retire, one in four (25 percent) of Britons would like to do so at 60.

Many want to enjoy more freedom while still being fit and well enough to enjoy it.

However, just less than a quarter (24 percent) found themselves heading back to work after early retirement because they experienced financial issues.

On top of this, nearly half (47 percent) of those taking early retirement said their finances had suffered as a result.

It’s a problem that affects everybody but in particular women, with 50 percent citing it as a problem.

With living costs soaring, retiring early will no doubt become even tougher in the years ahead.

Despite this, Aviva’s research suggests that people can still take positive steps to make their dream come true.

The secret to retiring early:

Respondents said paying off their mortgage early, saving small amounts often and saving pay rises or bonuses were helping them to reach their retirement goals.

Alistair McQueen, head of savings and retirement at Aviva, said early retirement is still possible for lots of people.

He said: “The turbulent times we’re living through have given many people pause for thought to consider their work-life balance and think more seriously about what makes them happy.”

He continued: “Our findings suggest the dream of an early retirement is very much alive and kicking, but there are many factors to consider along the way and the current uncertainty about the future does not make this an easy decision.

“The experiences of people who’ve already reached early retirement show that small savings habits, which add up over time, are every bit as important as big gestures such as putting aside any year-end bonus.

“It’s also important to learn from the lesson that, while happiness soars in retirement, many people find their finances take the strain when they retire early and money worries are one of the biggest factors resulting in people returning to work.

“If you aspire to retire early, it’s vital you plan your finances to be sustainable for the long-term.”

This follows a recent study by money.co.uk which found that Brits are woefully underprepared for retirement.

It found that one in ten will be forced to work past 66.

The study also asked respondents how they were planning to finance their retirement.

Traditional methods such as making use of savings accounts (38 percent) and investing in stocks and shares (15 percent) were among the most popular answers. 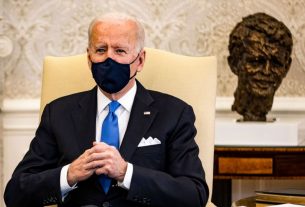 COVID battle lines harden ahead of Senate vote: The Note

Communication is simply the act of transferring information from one place, person …