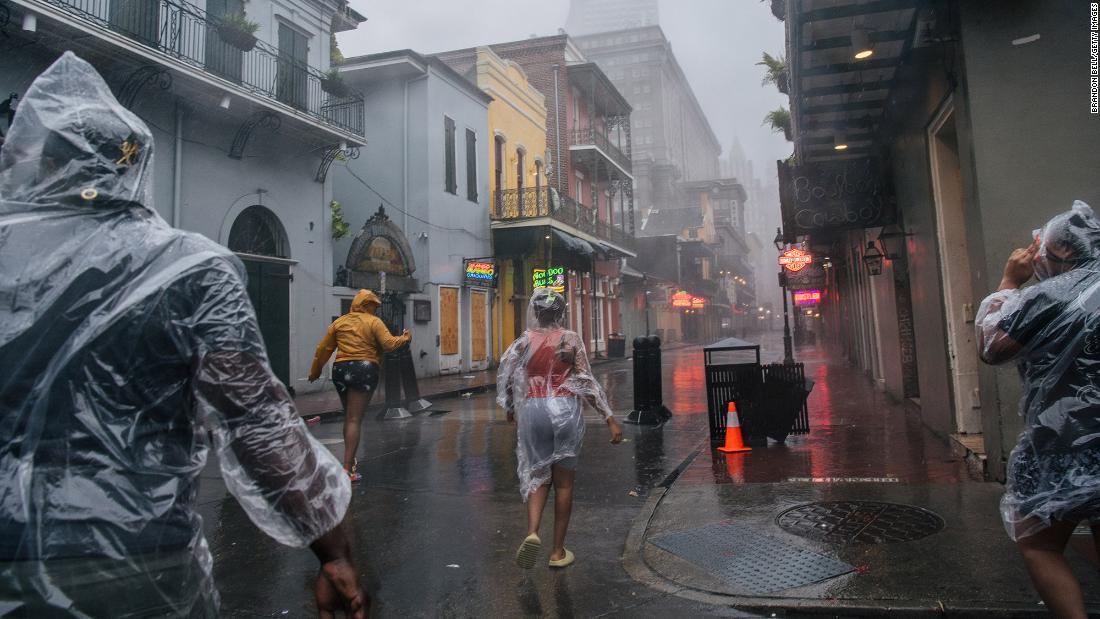 In an ever-more-internet-connected world, we are getting close-up views of extreme weather in ways that were hard to imagine a generation ago.

When Hurricane Ida barreled ashore and ransacked the Louisiana coast on Sunday, we were able to see the storm surge inundate Grand Isle through remote video cameras that were installed by storm chasers.

Locals also uploaded web-connected security camera footage of the rising waters to social media and streamed the winds on Facebook Live. Reporters weren’t embedded in these coastal and low-lying areas because the danger was simply too great, so webcams were the main way to assess the damage on Sunday.
Later in the day, as the center of Ida moved closer to New Orleans, residents posted panicked pleas for help on Twitter and other sites. Local reporters shared videos of homes that have been flooded. Other videos on Twitter and Instagram showed debris flying through the air in New Orleans.

Traffic cameras and levee monitoring webcams also provided dozens of views from inside the storm.
Some locations lost power and/or internet connectivity, but an impressive number of the cameras remained online throughout the day. It was the latest sign that the way we witness landfalling hurricanes is changing — perhaps providing a more visceral education for the public. Can all the live feeds and social snapshots, showing the real-time reality of the weather, cause viewers to take the threat more seriously?
And/or do some folks see the video clips and decide to head outside with their own cameras? “A video of a man plowing headlong into storm surge from Hurricane Ida garnered a stern warning from National Weather Service officials,” urging everyone to stay inside, Missy Wilkinson of The Advocate reported Sunday afternoon.
Storm chasers could not be dissuaded. Numerous chasers showed Ida’s storm surge pouring into towns like Golden Meadow, Larose and LaPlace. One camera crew said they were surrounded by water but were safe at a Motel 6 with high-enough ground.
By nightfall, a man on Twitter who called himself an oil field worker had posted a video from the actual site of the landfall, Port Fourchon, showing a toppled crane and other damage. Through texts, video clips and live streams, we’re experiencing hurricanes in new ways.

“Dark and dirty” in New Orleans

The situation in New Orleans went from bad to worse as night fell on Sunday. Power was knocked out across the city.
“This is the hardest day of my 30 year career. And tomorrow isn’t looking much better. We are being devastated,” David Bernard, the chief meteorologist at WVUE, the Fox affiliate in New Orleans, said around 8:30 p.m. Central time.
Around the same time, I asked CNN senior producer Sarah Boxer to describe what it felt like in the city. “Dark and dirty,” she responded: “Our hotel lost power hours ago, security has been hit with flying debris, and the storm has been unrelenting — but our crews are resourcefully crafting safe spaces for us to still be live and tell the story. Mercifully, we haven’t seen anyone on the streets for the last few hours in the French Quarter as the city continues battening down — and our teams will continue to report no matter when the lights come back on.”

At WGNO, the ABC affiliate in New Orleans, newsroom staffers evacuated to interior hallways as the winds picked up. Reporters said that one of the station’s satellite dishes was “smashed” outside. Then part of the roof was ripped away.
The weather center is “physically shaking at this point,” meteorologist Brooke Laizer said. Her colleague Hank Allen tweeted, “flakes of ceiling falling on me in studio here.” Water started leaking into the newsroom, as well. But the station stayed on the air through it all.
“We’ve had a lot of damage here at WGNO, but we’ve got to stay on the air to keep you posted,” Laizer said during the 10 p.m. hour.

— CNN has been live for 40+ straight hours, and will stay live overnight Sunday into Monday.
— The Weather Channel will also stay live. “We still have a long night to go,” Justin Michaels said on the air around 9 p.m.
— David Muir came in to anchor Sunday’s “World News Tonight.” NBC had Tom Llamas co-anchor the “Nightly News” from New Orleans, with Hallie Jackson co-anchoring from Washington.
— NBC’s Al Roker was slammed on social media after being “slammed by waves” during “Sunday Today.” To his critics who said he was putting himself in harm’s way, he responded that he knows how to stay safe. And to the trolls who said he was too old to be doing this, he said, “Screw you… Try to keep up!”

— Powerhouse NOLA station WWL’s live broadcast from its studios in the French Quarter occasionally switched to its backup studio in Baton Rouge, partly to make the point that it has built-in redundancy.
— For the very latest, check CNN.com’s live updates page here…
Source: Read Full Article

Effects Learn about the various causes of the Great …