CHECKING the weather app can be more unpredictable than the weather itself, but some new features will help — if you can find them.

Apple's Weather app added some helpful new features when iOS 15 released last year, but there's one you might have missed: the tiny white dot.

If you open the weather app on your iPhone or iPad and look down at the 10-day forecast, you'll see a white dot on the colored bars next to the predicted temperature for the current day.

The dot was designed to tell you where the current temperature falls on the temperature scale for the day.

For example, if the high is predicted to be 63 degrees and the white dot is at the end of the scale, that means you are currently in the warmest part of the day.

The white dot in the UV index represents the index at the current moment. You can use it to plan outdoor activities and to know how much sunscreen you should use.

On the Sunset times, the dot will indicate the sun's position in relation to the horizon. It also gives you an estimated time for the sunset.

MY NIGHT WITH GREALISH

Jack invited me to a party night thriller at villa, says Towie Chloe

The iOS 15 update made a few more changes to the Weather app as well.

Apple acquired the Dark Sky app in 2020 and merged some of the features, including hyper local and minute-by-minute forecasts. Dark Sky's iOS app and website will be shut down at the end of this year.

The app received a visual makeover, making it easier to navigate. It also added a global map with current temperatures.

The new update also features a weather map that tells you exactly where it's going to rain.

You can also scroll along the time of day, so that you can see when it will rain the hardest in your area.

First, make sure you've updated to the latest version of iOS.

Launch the Weather app – it's installed on your iPhone by default.

Then tap the map icon in the bottom-left corner of the app.

Now, tap the three squares stacked on top of each other in the top right.

Choose Precipitation and you'll be able to see a rolling forecast of rain as it moves around you.

You can use the bar along the bottom of the screen to move through time. If it's disappeared, just tap the screen to bring it back.

You can use the bar at the bottom of the screen to scroll along through the time of day.

This will show the precipitation moving across cities, countries and the world at large.

So you can see exactly where and when the rain will arrive – and when it'll be at its worst.

Of course, this is all predictive so the map might not be exactly right – but that's always the case with the weather. 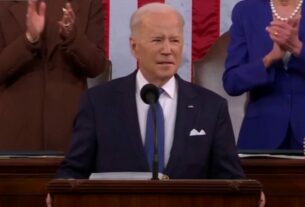 Top five takeaways from Biden's State of the Union address