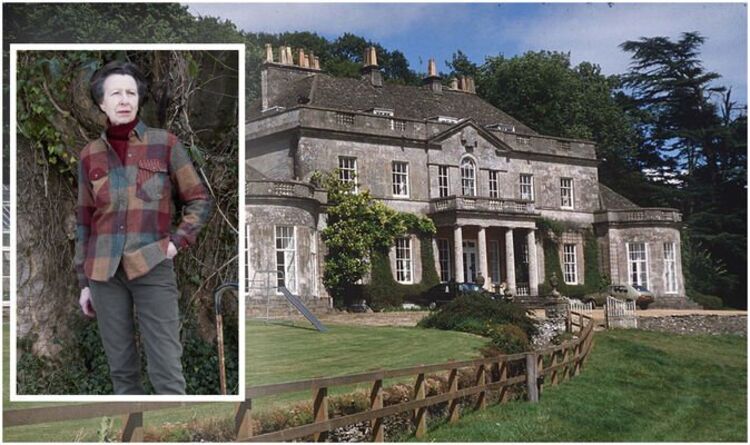 Princess Anne 'is the best of the royal family' says Galloway

Princess Anne, 71, lives in Gatcombe Park, a 700-acre estate out in the Gloucestershire countryside. This residence is purely a private home, but the grounds are occasionally opened up for horse trials as Princess Anne and her daughter Zara Tindall, 41, are both highly skilled former Olympic equestrians. Royal fans were delighted when the Royal Family posted a picture of the Princess Royal and her husband, Sir Timothy Laurence, 67, on their official Instagram page in February 2021.

The royal couple were photographed watching the Rugby Calcutta Cup, sitting next to each other relaxed on their sofa in front of their modest looking television.

They were surrounded by a fair bit of clutter on their coffee table: vases, books, papers, and porcelain figures. In their corner was a dog bed, as Princess Anne is a well-known breeder of Pitbull Terrier dogs.

On the walls, there were several landscape paintings, in what seemed like a cosy, modest-sized living room.

In the photo, the Princess Royal was dressed casually in a maroon sweater and black fleece vest. She sat cross-legged on a floral-printed, melon-coloured sofa next to her plaid-clad husband Timothy.

The Princess is the royal patron of the Scottish Rugby Team, explaining why they were watching the match.

In the room, there were two cabinets filled with little ornaments and framed photos.

Every surface in the room was stacked with books and other general clutter. It looked like the average living room you would expect your grandparents to relax in and enjoy themselves.

The cream-coloured walls were filled with a series of framed paintings, all of them appearing to be of various seaside towns.

Royal fans were conflicted about the interior of Princess Anne’s cosy living room.

One royal watcher, @lindajohnsonnnn wrote: “It’s nice to see even the royals have cluttered living spaces.”

Royal fan @tropics49 commented saying: “My goodness! Her décor looks like mine – right down to the furniture colours/pattern.

“And the assorted rugs, books, knick-knacks – maybe it’s an age thing? She and I are the same age! Hilarious decor!”

However other fans were less impressed.

Instagram user @hoarethelma said: “It looks like a room out of the 1950s with the decor of a 100-year-old. But each to their own!”

Another @susankousidis added: “Too crowded for my taste. Looks like an episode of Hoarders.”

The homely royal residence is located in Gatcombe Park, the Gloucestershire estate the Queen purchased for her daughter in 1976.

It has been Princess Anne’s main residence ever since with her husband Timothy Laurence.

The estate’s grounds are host to the annual Festival of British Eventing, as well as to other equestrian events.

Zara Tindall also maintains a home on the property with her husband, Mike Tindall, 43.

Similarly, Zara’s older brother Peter Phillips, 44, lives on the estate with his daughters, Savannah, 11, and Isla, 10.

When is the solar eclipse

Convert from Canadian dollars based on daily exchange rates…