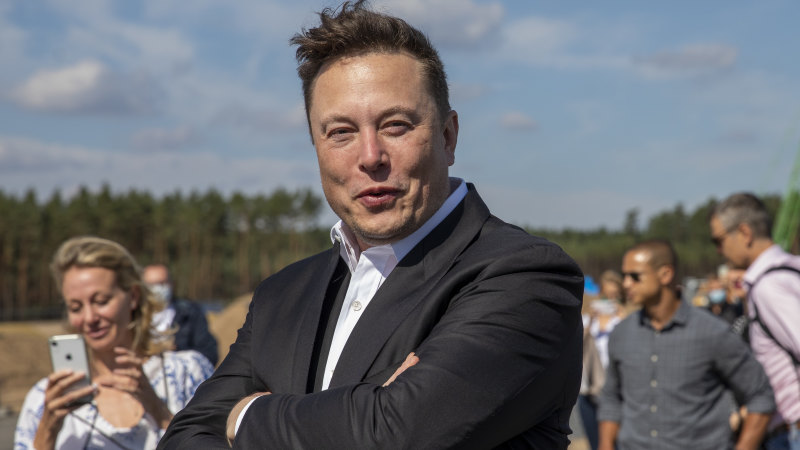 Few companies have had the capacity to divide the market quite like Tesla. Ruled by Elon Musk – to his supporters, a technical genius unparalleled in modern business, to his critics more salesman than savant – the business endured years of opposition from hedge funds and analysts convinced it was a bubble stock doomed to failure.

Those warnings have all but fallen silent today. After years of red-hot growth, including a 146 per cent rise in the past 12 months alone, the value of Tesla finally breached $US1 trillion ($1.3 trillion) this month to stand far above any other car company and among a select group of tech behemoths worth 13 figures. 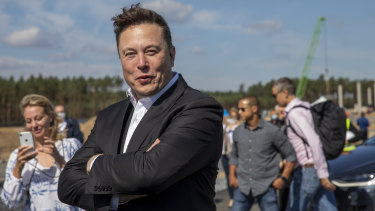 “Long-term believers in the electric vehicle revolution at Tesla always thought this day would eventually become a reality,” said Wedbush analyst Daniel Ives, who has long held a bullish stance on the electric car company. “Now the rest of [Wall] Street is starting to digest the impact of this impending green tidal wave.”

Tesla’s valuation is all the more striking given its annual revenues are yet to hit $US50 billion. It is only three months since the business’s quarterly profits broke $US1 billion for the first time.

Other tech companies to breach the same heights reported far higher profits in the same period, with Apple raking in $US21.7 billion and the Google owner Alphabet $US18.5 billion.

Put another way, Tesla built around 500,000 cars last year, giving it a market capitalisation equal to a $US2 million per car.

In 2020, the industry heavyweights Volkswagen Group and Toyota each sold just under 10 million vehicles. At their respective market capitalisations of around $US145 billion and $US242 billion, the companies’ cars come in at $US14,500 and $US24,200 respectively – a figure much closer to their retail prices.

When Tesla’s share price pushed past $US1000, Musk’s net worth jumped by $US36 billion in one day. Largely thanks to his 23 per cent stake in Tesla, the richest man in the world was personally more valuable than oil giant Exxon Mobil.

But Tesla isn’t just a company, it’s also a cult. Anyone who has ever dared to point out flaws with its products, highlighted its tardiness in delivering on Musk’s promises or even failed to agree with Tesla’s stated mission to “accelerate the world’s transition to sustainable energy” will have quickly found this out. The “Teslarati”, a vociferous group who believe Tesla’s way is the only way, will be quick to offer a brutal lesson via Twitter on why Musk is right and anyone else is wrong. 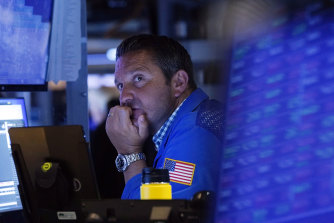 Tesla shares have soared 146 per cent in the past 12 months alone.Credit:AP

That cult isn’t the only reason for its success. Tesla bet on the electric vehicle market at just the right time: focus has honed worldwide on moving away from petrol-run cars in the battle against climate change. Meanwhile interest rates plummeted to rock bottom levels following the financial crisis, and again during coronavirus.

Now its capitalisation has topped $US1 trillion, questions are being asked how a company with speculative grade debt – indicating it is less likely to be able to pay back creditors – can sustain such a valuation, and if Musk’s empire is at risk of crumbling.

So far, Musk has persuaded investors to back his vision, and eccentric personality. Using a fortune made from co-founding the online payments company PayPal, he became chairman of Tesla in 2004 after investing $US6.3 million into the business which had been created a year earlier. Three years later its first car appeared – the $US109,000 Roadster, based on a design by Britain’s Lotus.

“Elon realised that you could buy in the engineering knowledge,” says Tim Urquhart, principal automotive analyst at IHS Markit. “The clever stuff, the electric powertrain, batteries, software, was what he concentrated on and no one else was really doing.

“And he was in the right place at the right time with the right idea. He saw the technology was ready and the world was ready for electric cars.”

Sales weren’t electric but there was confidence Tesla was onto something to be embraced, thanks to growing awareness of environmental issues and a “can do” attitude Musk inherited from the tech world.

Matt Windle, now boss of Lotus, who worked with Musk in Tesla’s early days when it tapped the British company for engineering expertise, says he saw this attitude in action.

“Elon would make decisions. He showed that if you make a quick decision and you get it 80 per cent right then you’ve moved 80 per cent forward as opposed to pondering and taking a long time doing nothing. That’s the start-up mentality,” says Windle.

By 2010, Tesla was delivering about 1,500 Roadsters a year and floated on the Nasdaq at $US17 a share, valuing the business at $US1.7 billion. It was the first time a car company had gone public in America in 50 years.

“Long-term believers in the electric vehicle revolution at Tesla always thought this day would eventually become a reality. Now the rest of [Wall] Street is starting to digest the impact of this impending green tidal wave.”

He taunted General Motors (GM) and Toyota that Tesla “wouldn’t get steamrollered” by established car makers because the culture of a tech start-up would make the business nimble. Automotive giants, he argued, couldn’t understand his vision of a future where all cars would be powered by electricity rather than oil. “We’re a Silicon Valley company,” he said. “Closer to Apple or Google than GM or Ford. I don’t think they can replicate that.”

“All Tesla’s shortcuts have failed,” he said. “They seem to hold the usual Silicon Valley view that the region is the sole repository of brainpower in the US and everyone east of the Sierras is a dim-witted dinosaur.” 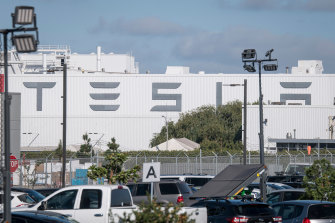 Tesla is aiming to sell a million cars this year.Credit:Bloomberg

An environment of low-cost debt has helped finance expansion, as well as a soaring share price giving ready access to funds. Tesla’s current debt of $US11 billion stands far lower than market giants – Volkswagen, for instance, holds $US243 billion, followed by Toyota with $US220 billion.

Some argue the company has established enough of a name to succeed. “It’s been successful at disrupting the market and forcing incumbent players to accelerate their electric plans,” says Ian Henry of AutoAnalysis. Musk, he adds, created a desirability around electric cars and established a “niche that it will retain”.

Even GM’s Lutz has admitted that he is finally encouraged by the electric car maker under Musk’s leadership, highlighting how he has reined in costs – needed for a business that is not profitable. “Tesla is finally being run like a normal business,” he said.

But with sales of a million this year, projected to double in 2022, it’s not enough to bank on the early adopters and the Teslarati to buy cars. The Texas-headquartered firm needs to capture the mass market. Meanwhile, other volume manufacturers are producing cheaper cars with similar specifications. VW, famed for its quality engineering, is pumping more than €70 billion ($108.2 billion) into electrification and related technology.

Just as Musk has to convince analysts he is capable of building more cars to boost profits, however, other car makers must deal with their massive debt piles. They also need to repurpose huge portfolios of plants, staff and engineering currently dedicated to internal combustion technology to the electric revolution.

What happens next is the question.

“Tesla’s Achilles’ heel has always been build quality,” says David Bailey, a car industry expert at Birmingham University and a Tesla driver himself. “The cars have a high driver satisfaction but dreadful problems with the standards the cars are made to.”

He says Tesla’s valuation doesn’t come from what it is, but what it might be.

“What’s priced into Tesla is the expectation that it will capture a big share of the market, that its technology will be adopted by others,” he says. “Tesla needs that to happen because long-established players who know how to build cars are coming, and coming fast.” 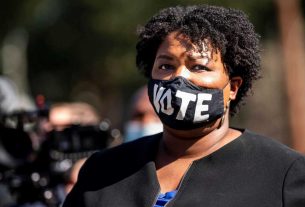 The General Agreement on Tariffs and Trade came into force …