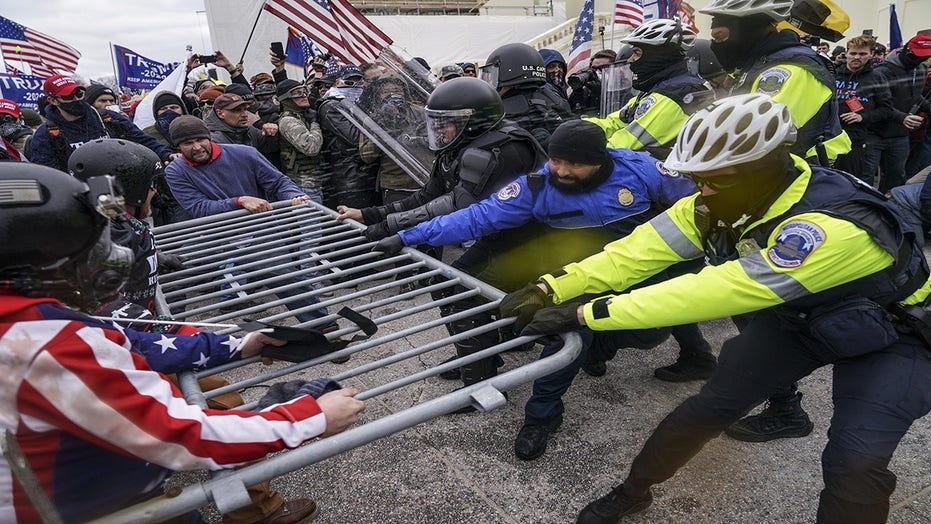 ‘Gutfeld!’ panel discusses why Democrats focus on Jan 6 riots rather than Biden crises.

So last night I did what many young men do when they’re alone – think about Katie Couric. Of course, she made news last week for admitting she cut out remarks about kneeling pro athletes from an interview with supreme court justice Ruth Bader Ginsburg, in order to protect Ginsburg. Like RBG needed protection from this nitwit. Hey Katie, Ginsburg in her current state is still mentally sharper than you.

Now over at CNN – in between pizzas, Brian Stelter fretted that her cover-up “contributes to a decline in trust in media.” Well, isn’t that the potbelly pig calling the kettle black? Brian, you’re a regular Magnum P.I. or in your case Magnum P.I.E. But even though media manipulation is still news to CNN, we’ve always known that if there’s a story they want you to obsess over, they’ll fill your day with it.

MSNBC runs the same clip of the same people scuffling with officers on January 6th over and over. Like it’s a re-run of “Will and Grace.” But if there’s a story they wish to hide, they’ll erase it faster than I do with my browsing history when the wife walks in.

Couric did it with RBG. They did it with the Hunter laptop story. Meanwhile, on Friday, amid a glut of bad news concerning his presidency, Biden tried to erase that by saying those who refuse subpoenas concerning January 6th, should be prosecuted. Cool.

But you see the trick. Every time inflation rises, the supply chain crunches, Afghanistan is a disaster, covid rages, and the president can’t answer a question – cue January 6th. Like the machine I used to make counterfeit gift certificates, it’s the gift that keeps on giving.

While the 6th was awful, it obviously paled in comparison to a typical night of George Floyd protests. By the way, have you noticed how the “I-word” has disappeared? Where did the “insurrection” go? Well, it never was.

Back in August, Reuters reported that the FBI found scant evidence that January 6th was the result of an organized plot to overturn Biden’s win, according to four current and former law enforcement officials.

Though feds have cuffed roughly 600 alleged participants, the FBI believes the violence wasn’t centrally coordinated by far-right groups or trump supporters, according to sources directly involved in the investigations. And you can trust FBI sources.

Like a plot to kidnap Michigan governor Gretchen Whitmer, they have intimate knowledge because they helped plan it. One official with inside knowledge described the suspects as “ninety to ninety-five percent one-off cases,” adding there was no grand scheme to storm the capitol. Meaning – January 6th was as organized as shoppers at Black Friday.

Thus, no one has been charged with sedition and or insurrection. Most have been hit with charges like “parading.” “Parading” — who knew that was a crime? By the way – it should be. I hate parades. Do you know how embarrassing it is for me to ask another adult if I can sit on their shoulders so I can see the turkey float go by?

But also, it’s hard to call January 6th an insurrection when you refuse to say the same thing about climate activists trying to break into the Department of the Interior. But that’s different because it’s climate.

JOY REID:  Ashli Babbitt, who was a trained Air Force specialist, trained by our tax dollars to kill, she was a military member. If she had gotten through that door, God knows what kind of harm she could have done.

ERIC SWALWELL: Ashley Babbitt was the woman that was leading the mob that was about to storm the House floor and she was shot by a brave officer that was the last line of defense for many members of congress and many of these members were the slowest, least mobile members. If they had been overrun by that mob, people would have been killed

It’s amazing how they really enjoy the death of a female veteran holding no weapons. But it’s easy, cuz it’s not like Ashlee Babbitt is sacred. See, there’s no such thing as a white victim to them. If MSNBC were around when Kennedy got shot, they would have said his limo was making a turn against the light.

But Ms. Babbitt was a Trump supporter. So she wasn’t just shot dead. She was erased. Hidden like Mayor Pete during a transportation crisis. Just like the Hunter laptop story and Couric’s RBG tale — the media, Dems and tech titans decided that Babbitt was not an appealing victim. Sure –she broke the law. But maybe the next step shouldn’t be shoot her dead.

But you can see how easy it is to go from calling her a terrorist, to calling all concerned parents, terrorists. But the media silence remains creepier than Biden buying pigtails on eBay. We know if she were BLM, she’d already have a plaza named after her. But instead, she’s a terrorist- with the media colluding with the Dems to turn her into ISIS.

It seems the media has problems finding real villains, so they have to make them up.

*Skit showing man giving praise to Johnny Carson in an interview but when the interview airs it is as if the man is praising Ted Bundy.”

No wonder Stelter has to be so surprised by this. He’s part of it. And so as expected, as Biden’s presidency implodes, they cling to January 6th – Like Leonardo DiCaprio clinging to a plank at the end of Titanic.

All to keep the target on the people they hate and protect those they don’t. Which is why I was thinking about Couric.

She did us all a favor. She showed us how the sausage is made, and it tastes awful. Which is maybe why we should stop eating it.

This article is adapted from Greg Gutfeld’s opening monologue on the October 18, 2021 edition of “Gutfeld!”

Jump to Definition – Measurements demand the use of operational definitions …