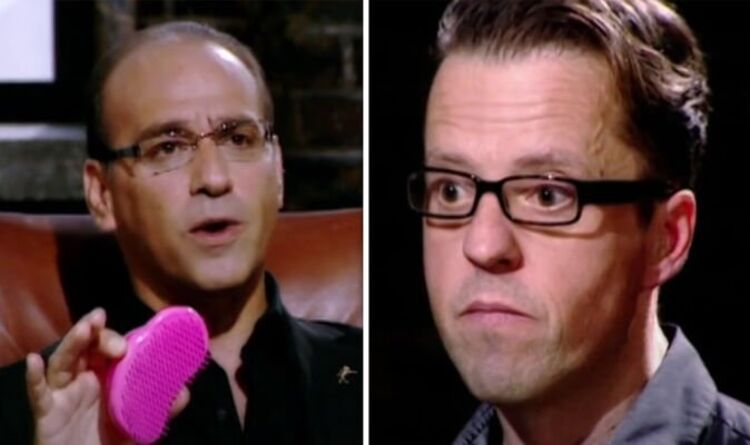 Mr Pulfrey entered the Den in 2007, seeking an investment of £80,000 for 15 percent for his hairbrush ’Tangle Teezer’. However the product was mocked by the Dragons’ Den cast with Peter Jones branding it a ‘hair-brained waste of time’, while Deborah Meaden likened it to a horse brush. None of the Dragons invested.

Mr Pulfrey said he had created a new hairdressing tool that would get rid of knots and tangles dreaded by hairdressers and consumers alike, aiming to market this product to both audiences.

To this day, Tangle Teezer is labelled the “one that got away” as it became one of the best selling hairbrush brands in the world, supported by celebrities and hair stylists.

It earned a Queen’s Award for Innovation in 2012 and for International Trade in 2014.

It is sold in more than 75 countries, through major retailers and online platforms, and now offers a broad range of tailored products for different hair types.

In August 2021, Mayfair Equity Partners reported that Mr Pulfrey had sold most of his shares in the business to them.

The deal valued the company at £70million and made Tangle Teezer one of the most “successful failures” in Dragon’s Den history.

During his pitch, Mr Pulfrey was unable to evidence any sales as he had only just began manufacturing the brush and had no deals lined up with distributors.

He had also inadvertently insulted Deborah’s hair colour; assuming that her blonde locks were coloured and not natural.

Both of these factors led all five Dragons to negate from investing.

Despite receiving no investment, the business went viral after the show was broadcast.

Mr Pulfrey said: “The evening it aired, my website crashed from so many people registering their interest.

“From then onwards, I really knew I was on to something.

“Everyone wanted to buy the Tangle Teezer Original, it was surreal.”

“Being rejected on Dragon’s Den didn’t put me off, if anything, it added fuel to the fire.”

The hairbrushes sell for between £8 and £14 and are sold world wide.

But while Tangle Teezer is cracking the UK, Britain accounts for just 20 percent of its clientele with demand soaring in America and Asia, The Mirror reported.

“I started off life as the son of a fisherman in Grimsby and so never in my life thought I’d start a multi-million pound international business,” Mr Pulfrey said.

Dragons’ Den is available to watch on BBC iPlayer.

A pole star or polar star is a star, …