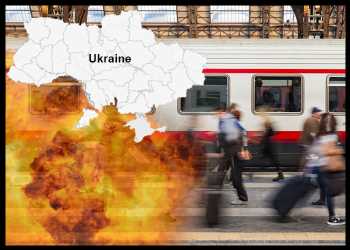 Ukrainian officials say more than 30 people were killed and dozens of others wounded in Russian missile attack on a train station in eastern Ukraine.

Two missiles hit the train station in the city of Kramatorsk, which has been used as an evacuation hub, the head of Ukraine’s national rail system, Oleksandr Kamyshin, said on his official Telegram channel Friday.

Thousands of people were waiting at the station to board train as they were being evacuated from combat zones in Kramatorsk and Donetsk Oblast, according to the Donetsk governor.

Kramatorsk was one of the cities that Russian forces targeted when they invaded Ukraine on February 24.

Meanwhile, the military governor of the Luhansk region warned that Russian forces are preparing for “massive breakthrough” attempt in Donbas region.

In yet another blow by the international community, the General Assembly of the United Nations overwhelmingly voted to suspend Russia from the UN Human Rights Council for committing gross and systemic violations of human rights.

A resolution calling for Russia to be suspended from the Council received a two-thirds majority of those voting in the 193-member Assembly, with 93 nations voting in favour and 24 against.

After Thursday’s historic vote, Russia will not be able to participate in the Council’s work as its Commission of Inquiry investigates Russia’s violations and abuses of human rights in Ukraine.

In a statement on the UN Vote, President Joe Biden said, “We will continue to work with responsible nations around the world to gather evidence to hold Russia accountable for the atrocities being committed, increase the pressure on Russia’s economy, and isolate Russia on the international stage.”