The bank is reminding its customers to protect themselves from fraudsters who may pose as their loved ones to scam them out of money. As part of its advice to potential victims, Lloyds is calling on its customers not to reply and to delete any messages which appear to be scams. Recent research carried out by Action Fraud found 25 WhatsApp message scams were reported in between August to October 2021.

While this may seem a relatively small number, the overall amount of money lost to these fraudulent texts came to £48,356.

Victims often receive an unexpected message that claims to be from a family member or a friend, according to the bank.

Fraudsters will attempt to worry their victims by convincing them that they are in a dire financial situation.

After doing this, the scammer will then ask their victim to pay money into their bank account to resolve the issue.

One unlucky victim lost almost £2,000 to someone who impersonated their son over WhatsApp with the fraudster claiming they had broken their phone.

The victim was then asked to make two invoice payments on behalf of the fraudster at which point they got suspicious, according to Action Fraud.

Another person lost £3,000 to a similar scam where someone again impersonated their son over WhatsApp.

Addressing the rise in this type of fraud, Louise Baxter, the head of the National Trading Standards Scams Team and Friends Against Scams, said: “Lots of people may feel immune to scams, but these ‘Friend in need’ scams are particularly effective as they prey on our kindness and desire to help friends and family.

“Scammers send messages that appear to come from a friend or family member asking for personal information, money, or a six-digit PIN number.

“The messages are sent from the compromised accounts of your friends, so they look as if they’re coming from someone you know, or from an unknown number claiming to be a friend who has lost their phone or been ‘locked out’ of their account.”

On its website, Lloyds provided general advice to its customers about how they can spot the signs that they are being targeted as part of a scam.

The bank stated: “Fraudsters can send emails and texts to try to scam you. Their goal is to steal your details and money. Scam messages often include a link to a fake site or a number to call a bogus company.

“We’ll never send a message with a link that asks you to log on or to give your banking details. If you get a message like this, don’t reply and delete it.”

Among its tips to customers, Lloyds suggested customers look for spelling mistakes in any messages, check the contact is genuine and double-check all information before any payment is made.

“But we want to remind people of the other ways they can keep their accounts safe and remain vigilant to the threat of scammers.

“We advise all users never to share their six-digit PIN code with others, not even friends or family, and recommend that all users set up two-step verification for added security.

“And, if you receive a suspicious message (even if you think you know who it’s from), calling or requesting a voice note is the fastest and simplest way to check someone is who they say they are.

“A friend in need is a friend worth calling.” 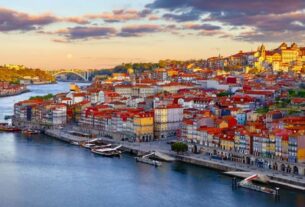 Want to live in Portugal? EU nation offers Brits low tax and residence – but not for long