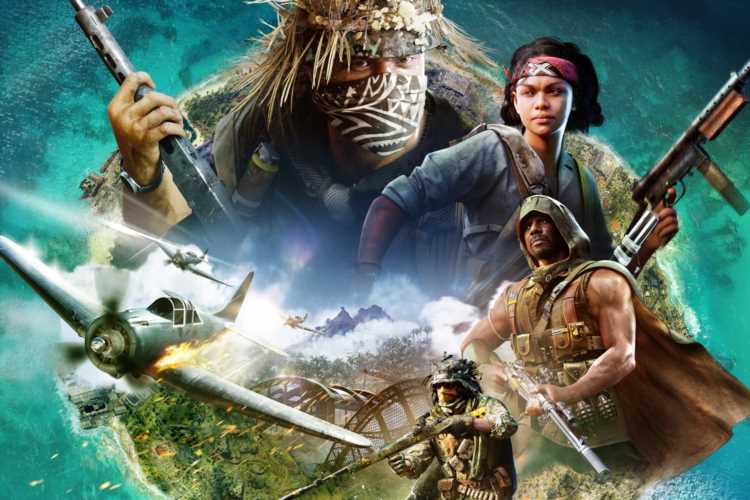 CALL of Duty players have gotten their first look at the upcoming Warzone Pacific Caldera map.

The new Warzone map releases next week and replaces the existing map that we're saying our goodbyes to in the Last Hours of Verdansk event. 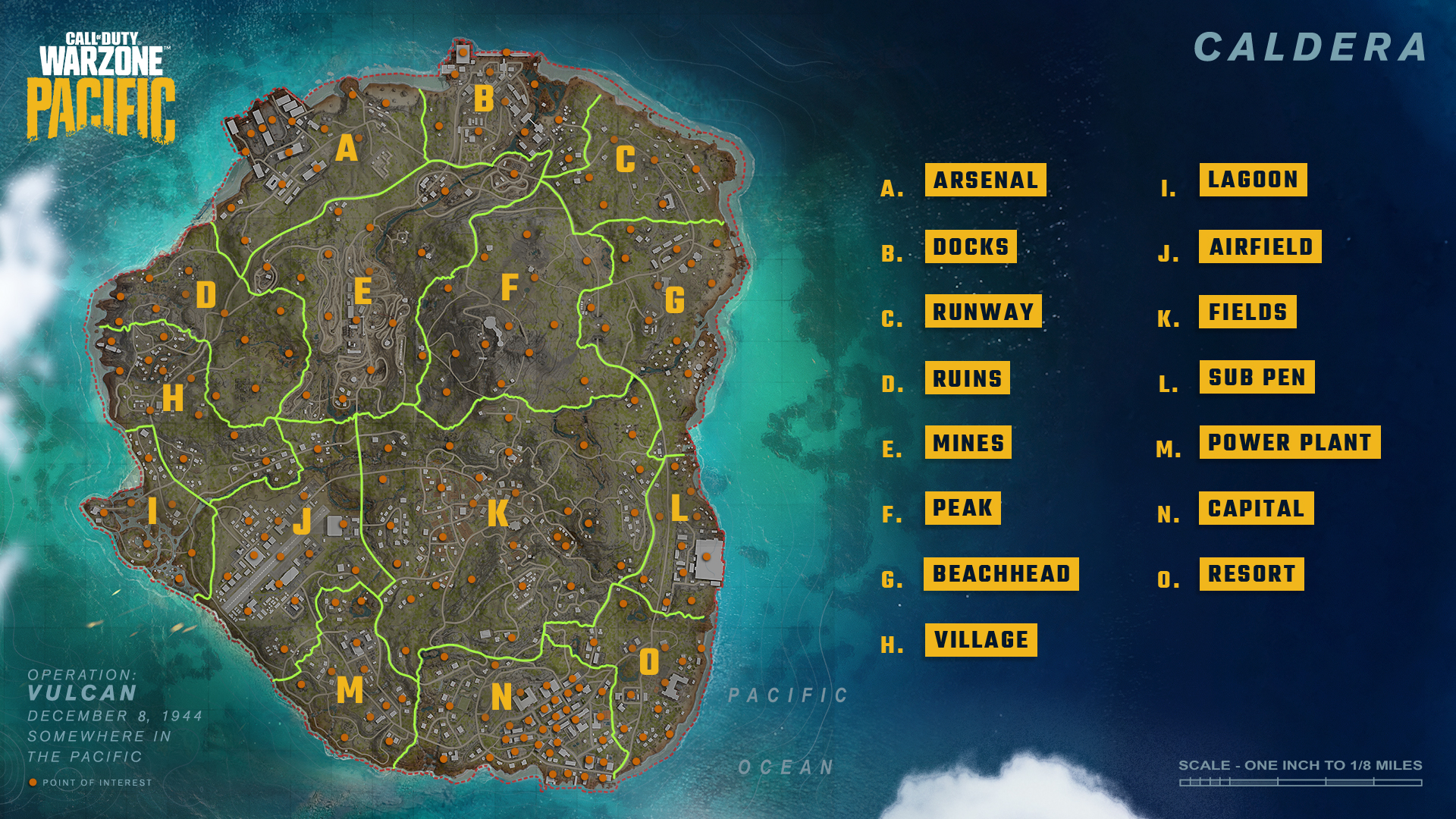 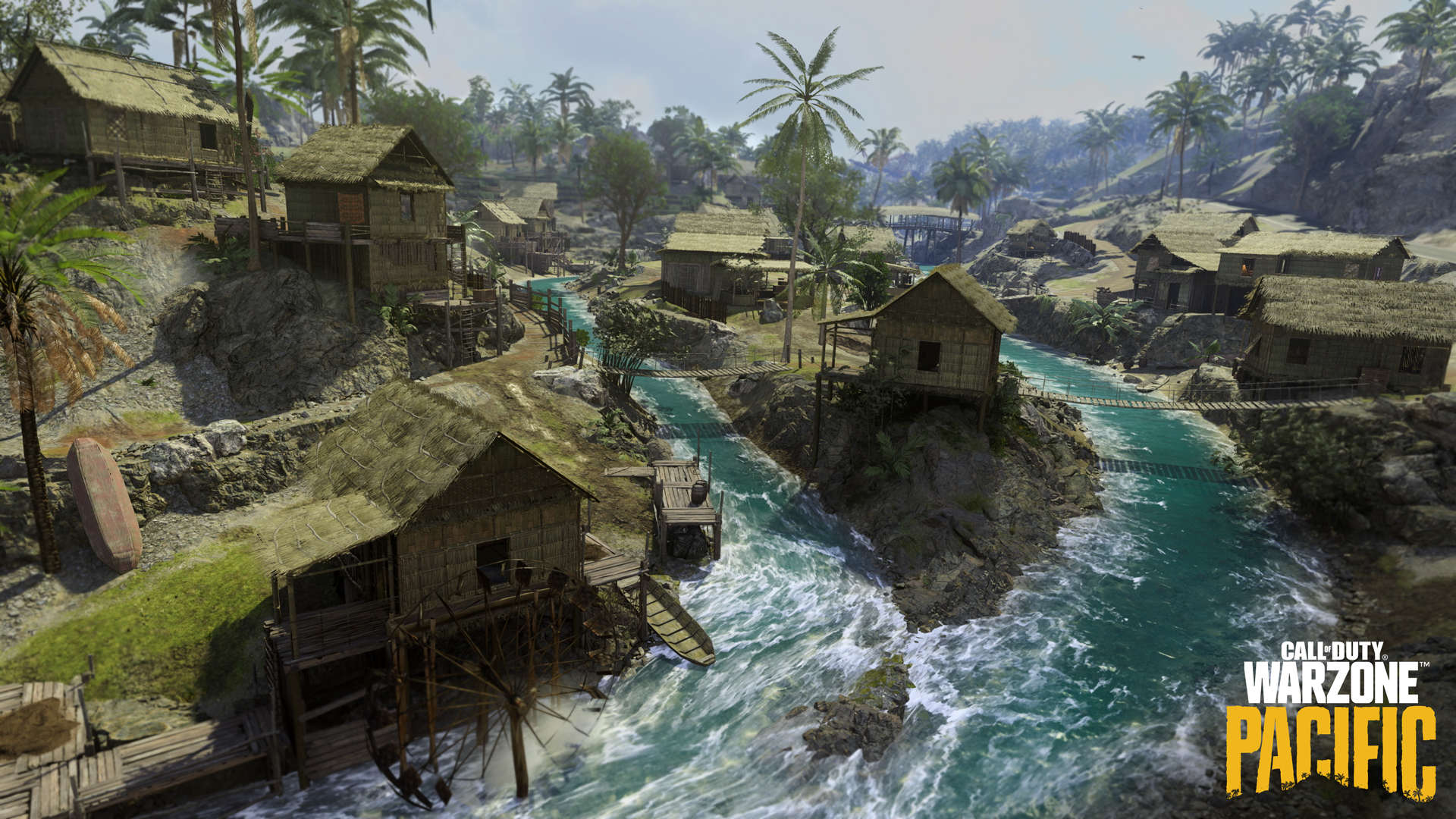 We got a sneak peek at it when Activision CCO Pelle Sjoenell 'leaked' a picture of the map last month.

But now the publisher has lifted the lid on on Call of Duty: Warzone Pacific's Caldera map, and here's all of the essential new info from the blog post.

Caldera is the new Warzone Pacific map and releases on Wednesday, December 8 for Call of Duty: Vanguard owners.

Everyone else can join the fray on Thursday, December 9 after the Caldera 24-hour early access period is over.

Caldera is made up of 15 "huge, distinct" areas and 200 points of interest, laid out on the topographical map above.

The leaked image left off a few of the drop zones, so here's all 15 Warzone Pacific drop zones awaiting you next week:

Located in the northwest, the shipyard and advance base offers a mix of indoor and outdoor combat scenarios.

"Unusual tactical positions" abound, while a beach and radar array lie to the east, and a group of buildings lie further inland.

The abandoned docks border on a number of POIs, like "fuel tanks, phosphate containers, and refineries from the Mines and Peak."

You'll also finda military base with Quonset barracks near the Arsenal, and a fishing village near the Runway.

A secondary runway located in the northeast corner of Caldera near the Beachhead and Arsenal-Docks.

Partly shrouded by the jungle, a military command centre further into the foliage teases "its own share of secrets."

North of the river village and west of the mine, you'll find these archaeological ruins.

Strike out east from the stream and through a jungle gully to find larger ruins tucked away in the forest.

You'll also stumble across tiered pools and hot springs which you won't be able to appreciate while you're fending off combatants.

The sizeable operation spans from the main gorge to the docks, while the buildings, machinery, and terrain offer a mix of engagement options.

The blog post teases more secrets here, nudging players to "look for older mine workings, and stumble across a [[REDACTED]] with its own [[REDACTED]]".

The peak of Caldera's dormant volcano marks the centre of the map, and offers the height advantage.

That's offset by being exposed but the rocky outcrops and main gondola station offer some reprieve if things get a bit manic.

The station sounds like another likely location for excitement, "that shuttles from the Peak toward the Runway, or the magma chamber and what was built during its slumber…"

Lying along the northwest coast, the beachhead is a network of trenches cut into the dunes.

The village lies to the south, lining a river gorge, "with plenty of main roads, dirt tracks, footpaths, goat trails, and jungle overgrowth to traverse in all directions."

The river village is mostly intact except for the remains of a cargo ship, and gun emplacement on the foothills to the west of the Peak.

The lagoon is home to more secrets, as well as the remains of Captain Butcher's plane.

The bay is overlooked by a lighthouse and is speckled with bamboo huts as well as residential homes that were more recently built.

The main airfield of Caldera is packed with aircraft and buildings, offset by the exposed tarmac.

The village is nearby while the base of operations near the southern coastal border also offers some measure of cover.

This is the largest POI in Caldera, lying to the south of the volcano, and peppered with machinery, buildings, and a number of other landmarks.

It's also the ideal place to navigate from to reach Caldera's southern zones.

You'll find the submarine pen on the east coast, along with a naval U-boat that's been left behind.

The largest military base on the island, there's a "massive interior" space to delve into as well as an intricate underground tunnel system.

The power plant is to the south of Airfield and is described as being "medium" in size.

There are ruins nearby and a "large radio antenna and a civilian radio station" to the south.

Built into a natural basin on the southern coast of Caldera, there are a ton of structures here to explore.

From the main city offices, to the Royal Theater, and Fire Station, the art deco architecture contrasts with the environment surrounding it and makes for an interesting combat arena.

The deserted hotel is easy to access with a vehicle but you won't be dropping off any luggage or grabbing a pool-side drink.

There's plenty to explore on the grounds as well as a small square, bus station, hotel entrance, and clock tower.

That's all for your detailed look at Caldera for now. The map looks huge and varied, and we can't wait to drop in!

Minecraft 1.18 update rolls out dramatic new changes to the game as you know it.

Gala Games vs The Sandbox vs Decentraland: Which is the top metaverse game. 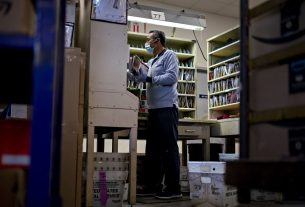