Mum says she has 'nothing left' without Universal Credit uplift

On BBC News this morning she said: “I need UC to pay the biggest majority of my bills and help towards food shopping every month. “I know I’m able to work and I’m grateful that I’m able to work but with having a small child with additional needs how am I supposed to be able to work full time?

“Losing it, with the price of gas and electric going up, it’s heat or eat.

Universal Credit is a payment designed to help those out of work, unable to work or who are on a low income.

The Department for Work and Pensions (DWP) agreed that every person receiving UC should receive an increase of £20 per week due to the COVID-19 pandemic.

However, this uplift was always supposed to be a short-term temporary measure.

Originally it had a planned ending in March 2021, but this was further extended until October.

Last month Therese Coffey claimed Universal Credit claimants can make back the money that they will lose from the uplift cut by working an extra two hours each week.

However, this was met with a lot of opposition from MPs and charities who said claimants would need to work up to nine extra hours a week to make-up the difference.

Ms Robinson continued: “It’s not just a couple of hours because of all those deductions, National Insurance, Tax, Universal credit deductions, it’s about nine hours.

“I can’t work those extra hours, I need to be picking my child up when school finishes, and I need to be able to give him anything he needs.

“My message to the government is to come and see people like myself who have used food banks, and emergency gas and electric banks so there’s heating in my house.

“People like me who have nothing left, we live in the real world, we don’t have luxuries, they don’t understand what it’s like for people like me.”

The cut of the temporary uplift has been described as “the single biggest overnight cut in the history of the welfare state”, affecting one in 14 British workers.

By removing this uplift, charities have said poverty may increase among the six million claimants of Universal Credit.

The government justifies the cuts as they are aiming to move more people into work, enabling them to make more money.

However, research has shown that 40 percent of these claimants – over two million people – are already in work.

Recipients will lose £1,040 annually as the uplift stops today.

However, Chancellor Rishi Sunak has previously denied that ending of the uplift would push more people into poverty.

This week the Chancellor extended the Government’s Kickstart Scheme helping young people on Universal Credit to find work will be extended to March next year.

The Kickstart Scheme is delivering funding for employers offering new job roles for 16-24 years olds who are currently in receipt of Universal Credit. 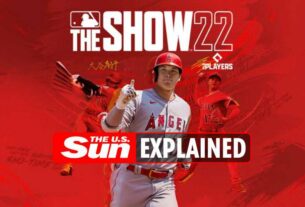 How can I buy MLB The Show 22 for Nintendo Switch?