The FTSE 100 and other global indices may be falling today, but the overall impact of Putin’s brutal invasion has been relatively mild. That’s not a one-off, either, it has happened throughout history.

As far as hard-nosed investors and traders are concerned, war is just another risk. That may seem shocking, given the horrendous human tragedy occurring in Ukraine, and the menace we all face as Putin makes veiled nuclear threats.

It’s the reality, though.

In 2014, when Russia invaded and annexed the Crimea, the US S&P 500 Index fell 6 percent, yet quickly bounced back.

It was the same story when the US invaded Iraq in 1991, and again in 2003. On both occasions, global stock markets plunged more than 10 percent, but recovered all of their early losses within months.

On the first day of trading after the September 11 terror attacks on the Twin Towers, the Dow Jones Average crashed more than 14 percent. Yet Wall Street had fought back by November.

It was the same story in World War 2. The Dow Jones crashed when the Japanese attacked Pearl Harbor in December 7, 1941, but by 1945 it was trading 50 percent higher.

While conflict carries a high human cost, the impact on stocks can be relatively muted, because investors look at the world in a different way to the rest of us.

While geopolitical events obviously affect share prices, the number one factor that investors take into account is individual stock performance.

That’s how they make their money: by investing in companies that deliver healthy profits and share price growth, and lavish loyal shareholders with dividends and buybacks.

As long as war doesn’t get in the way of that, they’ll carry on investing.

Of course, war can be disastrous for individual company performance, as any investors holding FTSE 100-listed Russian mining stocks Evraz and Polymetal International will have learned the hard way.

Shares in Evraz are down 55 percent over the last five days, while gold miner Polymetal has crashed by 75 percent since conflict broke out, Hargreaves Lansdown figures show.

Other companies are doing well, though, including FTSE 100 weapons maker BAE Systems, and oil majors BP and Shell, which are cashing in as the price of crude shoots past $100 a barrel.

War creates both winners and losers.

Pension and Isa savers should avoid the temptation to panic and sell everything they own right now, as some experts are suggesting.

On Sunday I reported that respected and experienced financial adviser Brian Dennehy is warning clients to Sell everything NOW before 50% crash as Putin drives nail in bull market.

Yes, markets could crash by 50 percent, especially if the West gets drawn into direct conflict with Russia, but nobody can say that for sure. If you dumped shares at every threat, you’d exit the market half a dozen times every year.

The problem is that if Dennehy is wrong and you have sold all your shares, you will end up losing money as markets stabilise and grow, as they do after every disaster.

So this is what you do to protect yourself. Most people should be investing over a 10, 20 or 30-year horizon, which allows them to look beyond short-term volatility.

You should never invest for a term of less than five years, to give you time to recover from a major crash.

If you definitely need that money in the next year or two, consider taking it out now.

Pensioners need to tread carefully, especially those in income drawdown, who face a double whammy if markets do crash.

Otherwise all you can do is keep your eyes on the long term, and hope short-term fears have been overdone.

If you’re still nervous, then maybe investing in shares isn’t for you. There’s no shame in that, given today’s fears. 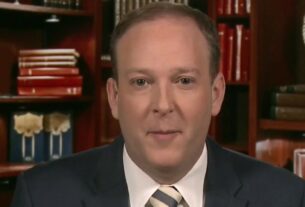 Gunning for Cuomo, Lee Zeldin rakes in big bucks on Day One