The war in Ukraine threatens to leave a bigger long-term impact on the market for Australia’s liquefied natural gas exports than Japan’s 2011 Fukushima nuclear disaster, as foreign investors abandon new Russian projects and buyers diversify away from Russian supply.

Western nations’ rapid withdrawal from Russia’s vast energy sector in the six weeks since the invasion of Ukraine has roiled global markets, deepened an energy crunch across the northern hemisphere and pushed prices for fossil fuel exports to multi-year highs. 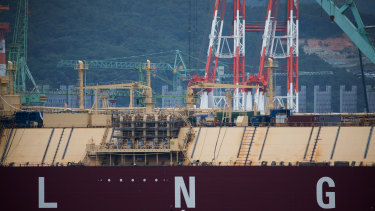 Russia’s invasion of Ukraine is set to leave lasting changes in the global LNG market.Credit:Bloomberg

By contrast, the shuttering of most of Japan’s nuclear power fleet in 2011 following the meltdowns at the Fukushima plant added 10 million tonnes a year of global demand for the super-chilled fuel.

“Ukraine could have more than 10 times the impact of Fukushima and last much longer,” Credit Suisse analyst Saul Kavonic said, describing the Russia-Ukraine conflict as the “most structural bullish event” in LNG’s history.

“I get the sense the market has not fully digested the extent of the long-term structural implications for LNG.”

Natural gas remains widely used around the world, and short-term demand and prices have been spiking as mounting economic sanctions on Moscow force utilities to find alternative supplies to Russian oil and gas to fuel transportation and keep the heaters and lights on. Brent oil, the international oil benchmark, has broken through the $US100-a-barrel mark for the first time since 2014, while uncontracted Australian LNG cargoes in North Asia have been selling at elevated prices above $US30 per million British thermal units.

However, efforts are also accelerating in Australia and around the world to cut the consumption of gas and other fossil fuels to reduce planet-heating greenhouse gas emissions and avert catastrophic global warming.

“There is really a thirst and demand for fossil fuels, and that’s growing rather than shrinking at this point,” he said. “When you have an unstable energy environment like we have today, it’s very difficult to get access to that capital for those investments.”

Aside from a near-term cash boost, Australian LNG producers such as Woodside and Santos may also stand to benefit in the longer-term from the impact of the Russia-Ukraine conflict, Mr Kavonic said. He has estimated that 33 million tonnes a year of LNG capacity under construction between Russia’s Arctic LNG 2 and Baltic LNG projects “may not proceed to start-up” because of a lack of funding by banks and international partners.

“TotalEnergies has said it will stop proving funds and remove reserves from Arctic LNG from its accounts,” he said. “Linde has also withdrawn from the 13 million-tonne-a-year Baltic LNG project, which has recently commenced construction.”

The structural shifts could also boost Santos and Woodside’s chances of selling down stakes in their Australian LNG projects, Mr Kavonic added.

“There is anecdotal support – via industry channel checks – of increased appetite and discussions by European and Asian LNG buyers in recent weeks, looking to secure long-term LNG volumes and equity in LNG projects,” he said.

Samurai were the hereditary military nobility and officer caste of …

Polaris is located in the constellation of Ursa Minor, …