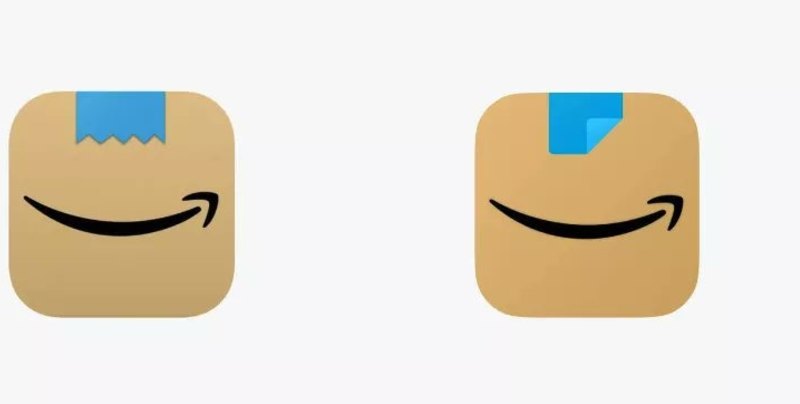 You might not have seen it until someone pointed it out. But an Amazon logo that was just quietly redesigned bore an unsettling resemblance to the face of Adolf Hitler — at least according to some on social media.

The much-mocked app icon, with a smile-shaped arrow beneath what looked like a toothbrush-style moustache, was unveiled in January, replacing a shopping-cart logo that had been used by the online-shopping giant for more than five years.

The company refused to say on Wednesday if criticism of the new logo prompted the second redesign this year, which blunted the scraggly edges and dog-eared a corner of the blue patch, which, according to Amazon, was always intended to evoke a piece of packaging tape.

“We designed the new icon to spark anticipation, excitement and joy when customers start their shopping journey on their phone, just as they do when they see our boxes on their doorstep,” the company said of the original change from the shopping-cart icon.

While Amazon did not respond directly to questions of whether the tweaks were made in response to chatter on social media and news reports about the logo, corporations are treading sensitive ground with their branding and the ability of social media to highlight trends or criticisms.

Kara S. Alaimo, a professor of public relations at Hofstra University, said that in an era of social media outrage and trolling, “branding experts should be bending over backward to consider all the ways people could misuse or misinterpret their logos prior to launch.”

“America is only becoming more diverse, and consumer expectations for companies to be sensitive to the experiences of different groups are growing,” she added. “If you’re a brand, you want to be driving and influencing cultural changes — not catching up to them.”

In recent years, companies have recast products, team names and logos, confronting racist stereotypes hiding in plain sight on everything from breakfast foods to cars to cups, such as some confiscated by authorities in Germany in 2014.

While some objections have addressed public-facing symbols and names, others have called attention to unintentional hidden messages or scrutinised designs that could be camouflaging or suggesting violent Nazi imagery.

In 2013, a J.C. Penney billboard was removed in California after some saw Hitler’s likeness in a teakettle featured on it. Last year Facebook removed advertisements on its platform that the Trump campaign bought that prominently featured a red triangle, a symbol used by Nazis to classify political prisoners.

At last week’s Conservative Political Action Conference, some viewers said the stage was shaped like a rune appropriated as a hate symbol by the Nazis. The organisation dismissed the assertion.

On Twitter, images of the Amazon app’s logo change were widely shared, in many languages, and reported by multiple news organisations outside the United States. In Germany, where reproductions of Nazi symbols are banned, the news of the Amazon logo change was covered in technology publications.

“Of course you can see Adolf Hitler everywhere, if you want,” Thomas Cloer, a journalist, said on Twitter.

The Anti-Defamation League’s chief executive, Jonathan A. Greenblatt, said Nazi symbols could become mainstreamed as they spread, especially by people who do not have a full understanding of their meaning.

The league, which curates an online database of hate symbols, has previously called attention to other examples, as when Zara sold a striped shirt with a six-pointed yellow Star of David, and H&M advertised a Black child wearing a sweatshirt that said “coolest monkey in the jungle.”

“It is always important for people to speak up when they see patterns in advertising or in design that could potentially be offensive,” Greenblatt said. “While in many cases these are unintentional, people are rightfully sensitive to these issues because of the history and the use of symbolism by racists and anti-Semites from the Nazis to the present white supremacist movement.”

Alaimo said it appeared Amazon did not anticipate that people would see Hitler references and that it had moved quickly to address the concerns.

In its emailed statement on Wednesday, Amazon said the new app icon “follows recent visual and functional updates.” It was launched on iOS in Britain, Spain, Italy and the Netherlands on Januarty 25; worldwide on iOS on February 22; and on Android on March 1.

Alexander Duszat, better known under the nickname Elton, is a German television presenter and …