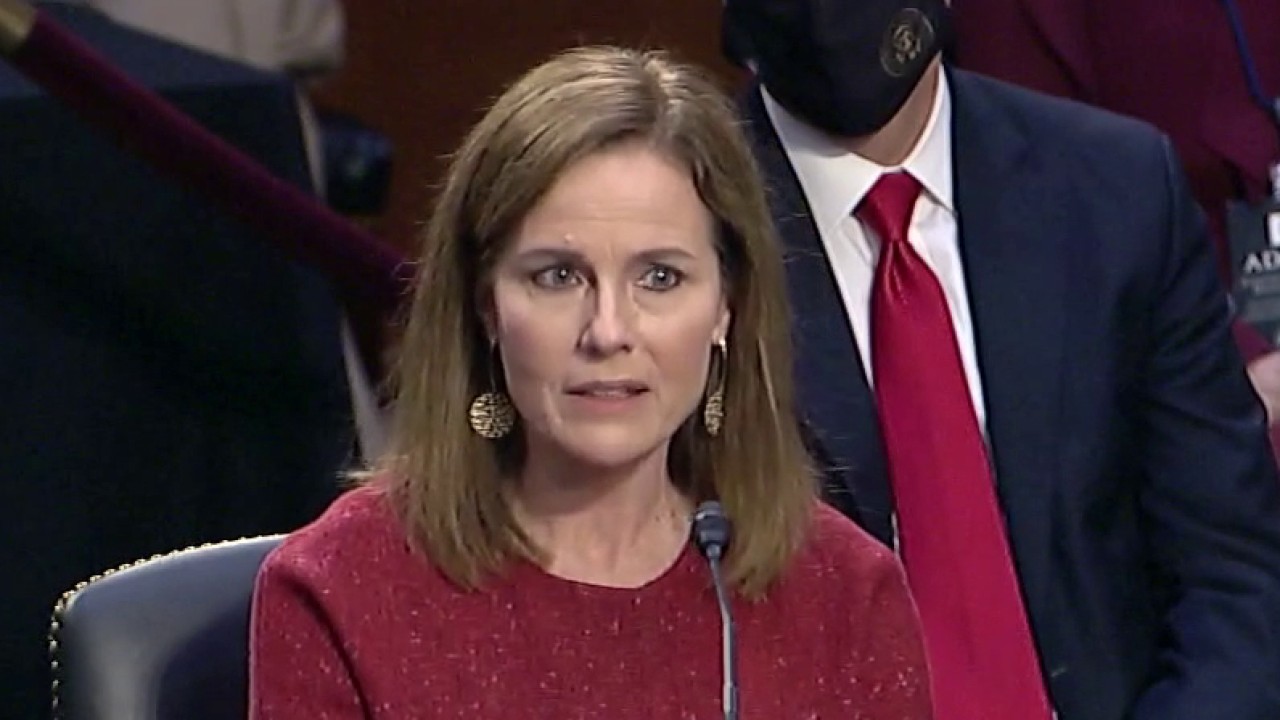 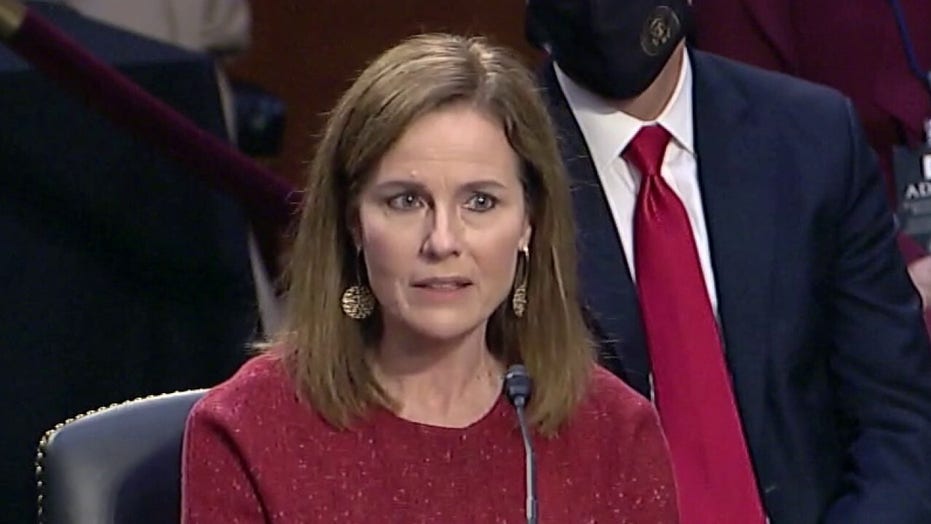 Day two of Judge Amy Coney Barrett’s Supreme Court confirmation hearings wrapped up Tuesday evening, ending a marathon session in which Democrats pressed the judge on her positions on matters such as abortion and gay rights, as Barrett repeatedly demurred, citing the “‘Ginsburg rule” in refusing to engage in hypotheticals.

1. Barrett impresses by responding to an entire day’s questioning without using notes

After hours of answering questions on her legal philosophy and recalling her own judgments and those of other courts, Sen. John Cornyn, R-Texas., asked Barrett about how she prepared.

“You know most of us have multiple notebooks and notes and books and things like that in front of us,” Cornyn said. “Can you hold up what you’ve been referring to in answering our questions?”

“Is there anything on it?” Cornyn asked.

Barrett cracked a smile and held up a blank notepad that was sitting in front of her.

“The letterhead that says ‘United States Senate,'” she responded as giggles echoed throughout the room.

2. Barrett cites “Ginsburg rule” in declining to give her opinion on hypothetical cases

Senate Judiciary Committee ranking member Dianne Feinstein, D-Calif., asked during Barrett's confirmation hearing if she agrees with the late Justice Antonin Scalia's view that the Constitution does not guarantee a right to gay marriage.

"I'm not going to express a view on whether I agree or disagree with Justice Scalia for the same reasons that I've been giving," Barrett said. “Justice Ginsburg with her characteristic pithiness used this to describe how a nominee should comport herself at a hearing: no hints, no previews, no forecasts. That has been the practice of nominees before her, but everybody calls it the 'Ginsburg Rule' because she stated it so concisely and it’s been the practice of every nominee since."

Barrett held true to the standard throughout questions on how she would rule throughout the day.

3. Barrett says she knew her faith would be “caricatured”

Democrats aggressively barraged Barrett with questions on hot-button cases that might have stood at odds with her Catholic faith, but she remained tight-lipped.

Barrett said she’d been trying to avoid looking at her own media portrayal.

"I've tried to be on a media blackout for the sake of my mental health," Barrett told the committee. "You can't keep yourself walled off from everything and I'm aware of a lot of the caricatures that are floating around."

She added: "We knew that our lives would be combed over for any negative detail. We knew that our faith would be caricatured. We knew our family would be attacked. And so we had to decide whether those difficulties would be worth it because what sane person would go through that if there wasn't a benefit on the other side?"

Barrett continued to say that the benefit is "that I'm committed to the rule of law and the role of the Supreme Court in dispensing equal justice for all. And I'm not the only person who can do this job. But I was asked, and it would be difficult for anyone. So why should I say someone else should do the difficulty if the difficulty is the only reason to say no?"

4. Barrett says she made “no commitment” to the White House

As Democrats asserted that President Trump had nominated Barrett under the assumption she would work to overturn the Affordable Care Act and Roe v. Wade, the judge said she had made “no commitment” to do so to the White House.

"I have had no conversation with the president or any of his staff on how I might rule in that case," Barrett said. "It would be a gross violation of judicial independence for me to make any such commitment or be asked about that case and how I would rule."

In a first, albeit inconclusive, sneak peek into how Barrett might handle an abortion case, she told Sen. Amy Klobuchar that Roe v. Wade was not a “super precedent,” or a settled case that could not be overruled.

Barrett said that a case like Brown v. Board of Education, which banned segregation in schools, would be considered a super precedent because “people consider it to be on that very small list of things so widely established and agreed upon by everyone, calls for its overruling simply don’t exist.”

But the questions about Roe is what led her to conclude that Roe was not a case that could not be overturned.

“I'm answering a lot of questions about Roe, which I think indicates that Roe doesn’t fall into that category,” the Supreme Court nominee said.

Barrett pointed to Harvard Law professor Richard Fallon, who argued Roe v. Wade is not a super precedent because “calls for its overruling have never ceased.”

“That doesn’t mean that Roe should be overruled,” the circuit court judge said. “It just means that it doesn’t fall in the small handful of cases like Marbury v. Madison and Brown v. Board that no one questions anymore.”

Sen. Mazie Hirono, D-Hawaii, opened her questioning time by blasting the Senate for choosing to move forward with confirmation hearings instead of working on coronavirus relief.

She then asked the judge if she had ever assaulted anyone.

“Since you became a legal adult, have you ever made unwanted requests for sexual favors, or committed any physical or verbal harassment or assault of a sexual nature?” Hirono asked.

“Have you ever faced discipline or entered into a settlement related to this kind of conduct?” Hirono then asked.

After that, Hirono said that the LGBTQ community had a right to be “concerned” after Barrett promised not to discriminate on “sexual preference.”

"Sexual preference is an offensive and outdated term, it is used by anti-LGBTQ activists to suggest that sexual orientation is a choice — it is not," Hirono said.

“The LGBTQ community should be rightly concerned whether you would uphold their constitutional right to marry,” Hirono concluded.

Later Sen. Cory Booker, D-N.J., asked Barrett about her use of the term again.

“In using that word I did not mean to imply that it is not an immutable characteristic or that it’s solely a preference,” she said. “I fully respect the rights of the LGBTQ community. Obergefell was an important precedent of the court." 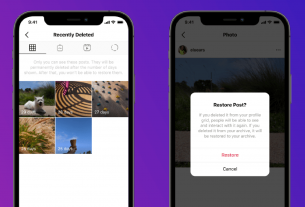 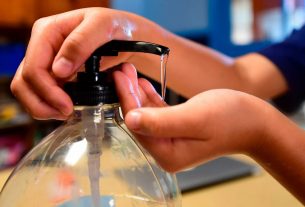 Visit the Chrome Web Store on your desktop computer to…